Last weekend the staff of Hannon Library hit the streets, marching in the 2015 Old Fashioned 4th of July Celebration, an event that has been celebrated in Ashland for over 100 years.

The Old Fashioned 4th of July Celebration begins every year at the crack of dawn, with a morning run, and ends with a massive parade. The parade attracts an estimated 20,000 spectators according to the Ashland Chamber of Commerce.

Hannon Library staff marched in the parade surrounded by over 100 representatives of the different programs and departments at Southern Oregon University. SOU’s entry in the parade had everything from a rock band playing music from the back of a truck, to SOU President Roy Saigo waving to thousands of audience members.

SOU is indispensable to the economic and cultural framework of Ashland. Because of SOU’s important role in the region, university employees love to participate in the events and traditions that make Ashland great. Usually, hundreds of insects would not make a building better, but this is not the case with Hannon Library’s latest digital collection. Hannon Library has teamed up with students, researchers, and amateur collectors to create the Southern Oregon University Insect Museum—Butterfly Collection.

The digital collection displays over 300 butterflies from the Oregon and Northern California regions. Visitors to the library’s website can see every kind of local butterfly imaginable, from Anglewings to Tortoiseshells.

Whether you have a passion for nature, insects, or just love beautiful photos, check out this great new collection on our website. 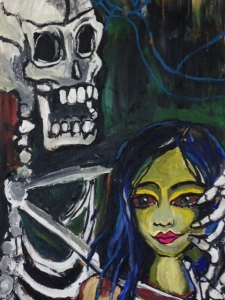 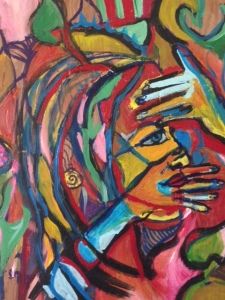 Kate Burrow is an Ashland artist that has a distinct style within her painting techniques as well as the canvases she chooses to use. She primarily works with either oil or acrylic paint on scraps of uniquely aged wood, which she usually finds around town. The paintings themselves are portraits of either people she has known, seen, or observed, or of people she envisions one day meeting. Burrow compliments these portraits with bright, vibrant colors that draw the viewer in to understand the character that is being portrayed.

Kate Burrow’s paintings will be on display in the third floor gallery through the July. Visitors can view the exhibit anytime during library business hours. Student workers play a major role in how the library operates. With

The staff at Hannon Library wish nothing but success for all of our graduating students. Congratulations class of 2015!