The Southern Oregon Digital Archives (SODA) is a digital library with thousands of scanned images and documents. These collections are curated, digitized, and made available to the public on the Hannon Library website .

Our newest SODA collection, Stories of Southern Oregon, archives generations of regional history and the life stories of the people of Southern Oregon. This project celebrates cultural traditions and a shared heritage of agriculture, the timber industry, mining, mills, and even aerial wildfire suppression.

Among the new collections are historic photographs from the Siskiyou Smokejumper Base Museum, which is located at the Illinois Valley airstrip outside of Cave Junction, Oregon. Smokejumpers are specially trained firefighters that parachute into remote forest areas to combat developing wildfires. The smokejumper base in Cave Junction was established in 1943, when smokejumping was still a relatively new approach to firefighting.

Photos from this collection capture the life and work of smokejumpers during the 1940s through the 1970s. From behind-the-scenes images of the Siskiyou Base to live shots of jumpers launching themselves from airplanes, this collection is a special part of Oregon’s history. 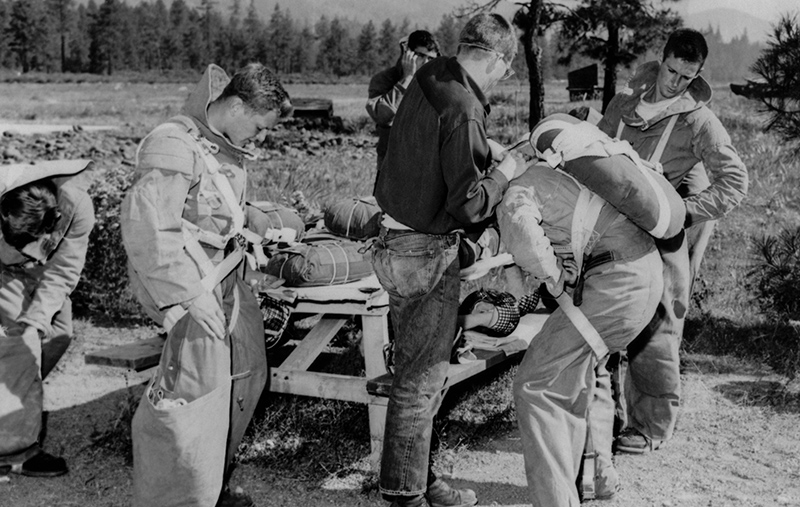 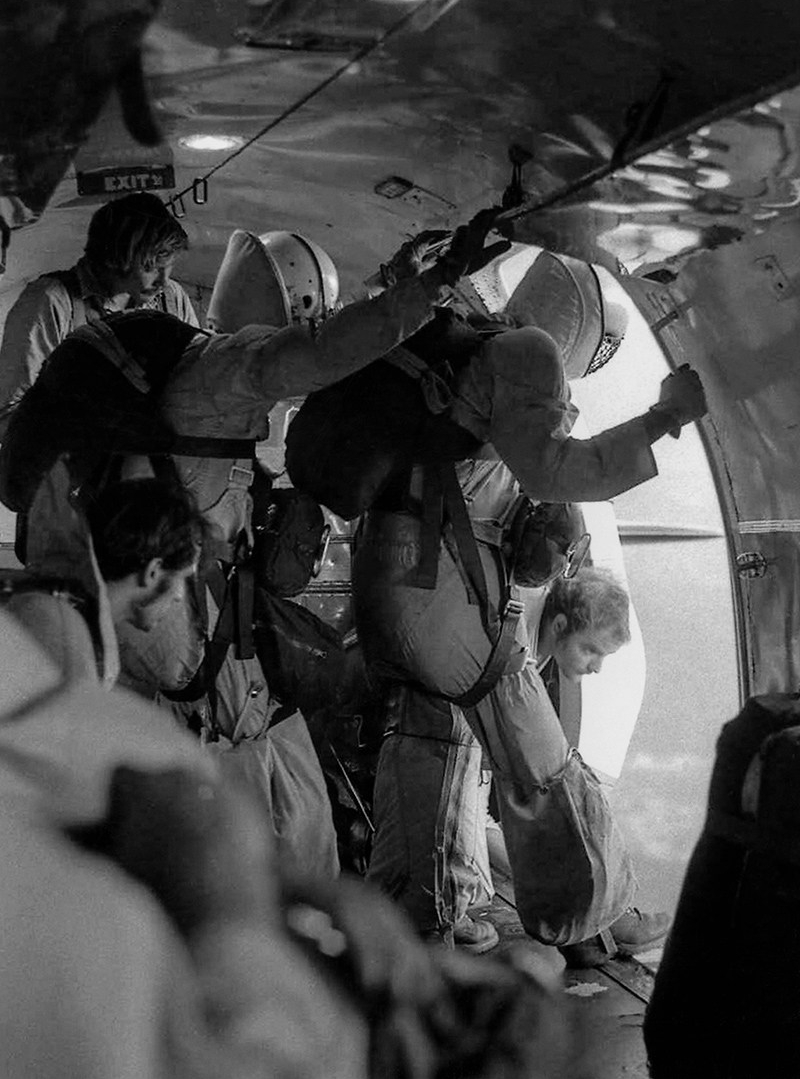 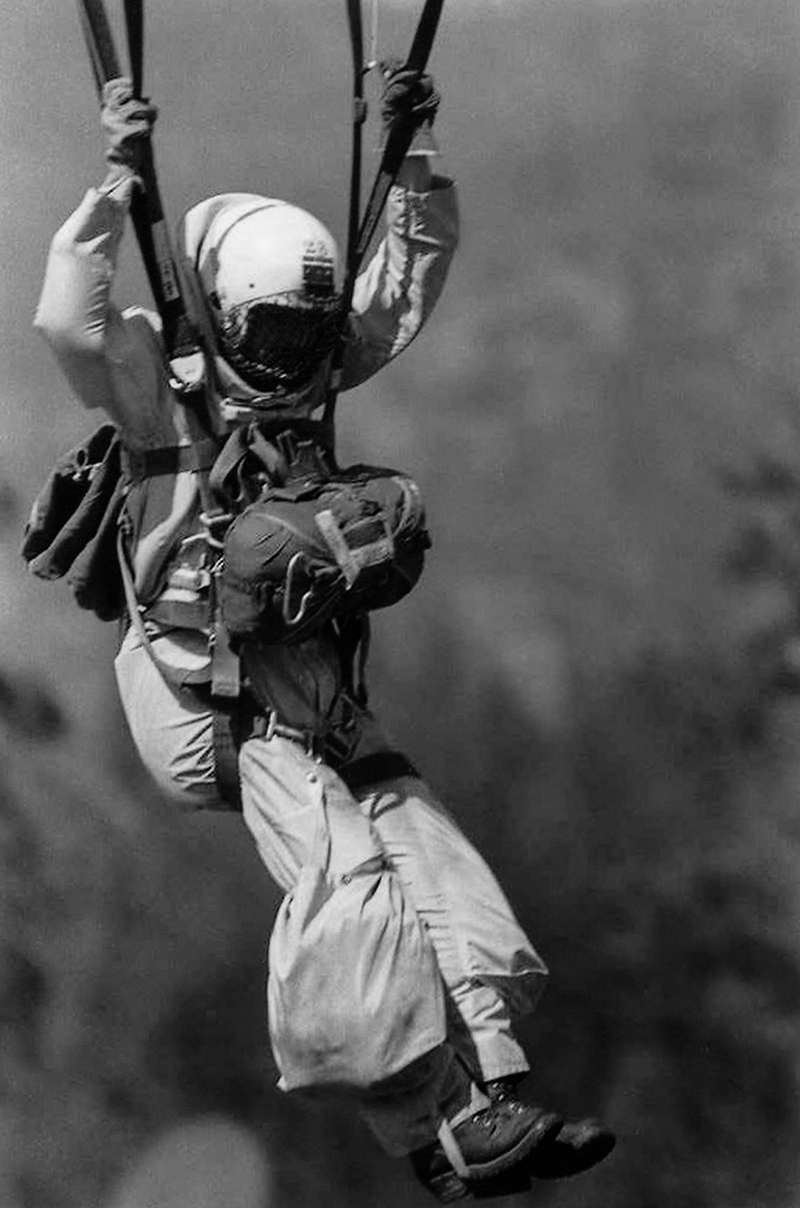 Hannon Library has two platforms for digital collections. The original platform, Knowvation (formerly ArchivalWare), includes the Bioregion, First Nations, Southern Oregon History collections as well as the Institutional Repository with SOU scholarship from faculty and students. These are primarily collections of text documents.

Several of these projects were supported in whole (or in part) by the Institute of Museum and Library Services through the Library Services and Technology Act, administered by the Oregon State Library. Other support also provided by the National Endowment for the Humanities. Jeff LaLande presents “When Timber Was King: The Rise and Decline of Southern Oregon’s Timber Industry” on Thursday, March 8, 2018 at 4 pm at Southern Oregon University’s Hannon Library (Meese Room). This event is free and open to the public.

In the early days, men felled the big trees with just an axe and dragged timber out of the forest with mules and oxen. Steam donkeys, two-handled saws, railroad lines and trucks changed the landscape and Rogue Valley mills ran 24×7. Today, most of Southern Oregon’s mills are silent, and a truck with a three-log load is rare indeed.

In this unusual presentation, LaLande describes the legislation, corporate powers and political changes that have altered the Oregon landscape forever.

Forest historian and archaeologist Dr. Jeffrey LaLande, now retired, worked with the U.S. Forest Service for nearly 50 years. He has traipsed the land, seeking out the equipment and traces of the timber industry’s history from long ago to more contemporary times. He photographed his findings for the Forest Service, cataloging places that few know of and fewer even have seen. LaLande also wrote narrative and scientific histories of the region’s great timber industry that drove Southern Oregon’s economy for a hundred years.

Thanks to a 2017 Library Services and Technology Act grant to Hannon Library, LaLande’s collection of historic timber industry photos are being digitized and will made available through the Southern Oregon Digital Archives (SODA) in the Stories of Southern Oregon Collection. LaLande’s earlier SODA contribution, a set of 647 images in the Rogue River National Forest Historic Images Collection, is available now.

For more information on the March 7, 2018 program or the Southern Oregon Digital Archives, call 541-552-6442. If you need disability accommodations to participate in this event, please contact Disability Resources at 541-552-6213 or dss@sou.edu. Sue Naumes presents “Pear Box Labels: the History of the Rogue Valley” Thursday, February 1, 2018 at 4 pm at Southern Oregon University’s Hannon Library (Meese Room). This event is free and open to the public.

By 1910, Southern Oregon was in the throes of a land boom, the result of commercial pear cultivation and the railroad that brought those pears to national markets. Every box of pears packed had a label on its side, a bright and colorful label that pronounced the quality of the fruit and the excellence of a Rogue Valley’s company brand.

Naumes has been collecting pear box labels for most of her adult life, and each tells the story of a Rogue Valley grower, packer or shipper. Her collection is brilliant, graphically compelling and a fascinating insight into the politics and power struggles that began at the turn of the century. She’s found labels in burned out buildings, old warehouses, on eBay, at shows and in thrift shops. Her collection is extraordinary in its comprehensiveness and beauty, and Naumes knows the story behind every label.

Thanks to a 2017 Library Services and Technology Act grant to Southern Oregon University’s Hannon Library, Naumes’ pear box labels are being digitized and will made available through the Southern Oregon Digital Archives (SODA) in the Stories of Southern Oregon collection.

Naumes’ grandparents, John Peter and Dillie Naumes, settled in the Rogue Valley in 1929 and helped start the Associated Fruit Co. and began an agricultural enterprise that would become one of the largest in Southern Oregon. Naumes, Inc. was established in 1946 as the Nye & Naumes Packing House by Naumes’ father, William Joseph “Joe” Naumes Jr. and Stephen G. Nye Jr. selling product under the NANPAK label at 619 South Grape Street in Medford, Oregon. It was the first ground level fruit packing plant in the northwest setting a new efficiency standard in fruit packing house design. David Lawry bought up Associated Fruit in 1950 and in the mid-late 1960s Joe Naumes bought out Nye’s interest. In the 1970s, Joe Naumes’ children, Mike and Sue Naumes, returned to help manage the company.

Joe Naumes died on July 4, 1989. At the time of his death, the Naumes family owned 7,000 acres of fruit and nut trees in Washington, Oregon and California and was said to be the largest producer of Bosc pears in the world. Today, Mike Naumes, Laura Ernest Naumes and their children, Joe, Cynthia and Sean manage the family enterprise.

For more information on the Feb. 1, 2018 program at Hannon Library or the Southern Oregon Digital Archives, call 541-552-6442. If you disability accommodations to participate in this event, please contact Disability Resources at 541-552-6213 or dss@sou.edu. Had any good wine lately? If so, you can thank the 21st Amendment for that.

On December 5, 1933, the United States Congress passed the 21st Amendment, putting an end to the Prohibition Era. Once again, Americans could buy, sell, and consume alcoholic beverage.

Now, more than eighty years later, many Oregonians have made the most of this change of heart by developing vineyards and wineries, putting our fair state on the map for quality wine. Which is why we suggest commemorating Repeal Day, not with a toast or a toddy, but with a trip to the library. 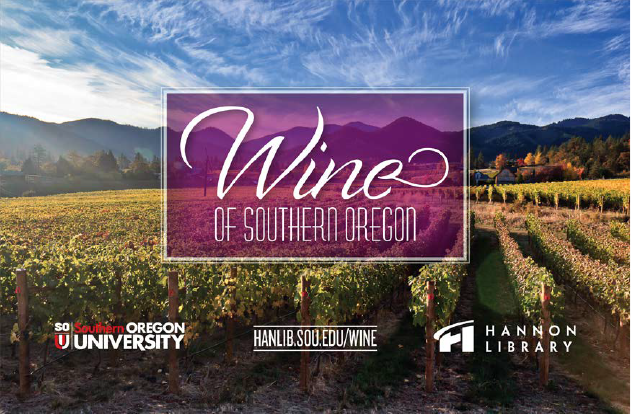 Hannon Library has been documenting the history of wine production in Southern Oregon with an ever-growing collection of photographs, wine labels, books, journals, and other materials. A visit to our Special Collections department will yield hundreds of books about wine, viticulture, and enology. Or you can explore our digital collections online to see historical photos, wine labels, annual reports, and more.

Learn more about Hannon Library’s Wine and Viticulture Collection at our Special Collections website, and remember to celebrate our rights and freedoms responsibly.